Lundehunds were developed in the 1500s on remote islands off the northern and western coasts of Norway. They were specifically bred to scale steep, rocky cliffs and enter narrow, often treacherous subterranean tunnels in search of fledgling Puffins. Also known as “sea-parrots,” Puffins resemble Penguins, except that they can fly. Puffins breed in large colonies in seaside caves and hidden passageways on these rocky cliffs. Adult Puffins are fiercely protective of their young chicks. They have powerful necks, strong beaks and sharp talons, which makes them poor targets for small hunting dogs. However, when Puffins reach about 40 days of age, the parents lose their protective instincts, and the chicks must start fending for themselves. In a good year (for the hunters), the young birds are so fat by that time that they cannot easily leave their nests. After a few days without food or parental attention, the fledglings usually slim down and can wriggle out. However, they cannot yet fly and must be pushed (“puffed”) or carried by adult birds across the mountainside to the sea. Plump young Puffins are especially vulnerable to predators during this dangerous journey. 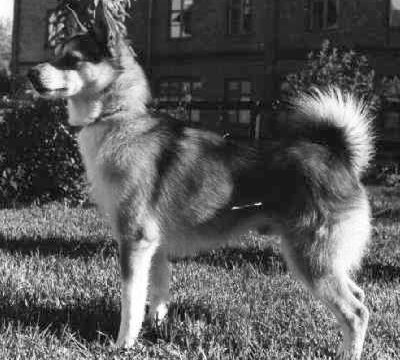 Early Norwegian hunters understood the Puffins’ breeding cycle and sent their Lundehunds to find and fetch fledglings during this brief window of opportunity. Lundies were excellent at scaling rocky outposts, crawling into tight places and finding Puffin nesting colonies. The dogs instinctively brought the birds back alive and relatively unharmed to their owners. Each Lundehund might retrieve 20 or more fledglings during a single night’s hunt. Most hunters had two or three Lundehunds so that they could get a “grown man's catch,” which was upwards of 70 birds. Exceptional dogs retrieved more than 100 birds a night. Occasionally, the Puffins got the best of a Lundehund – especially an immature or inexperienced one. The birds’ razor-sharp beaks and talons could inflict significant damage. Once in a while, a dog slipped on loose stones and fell to its death, or simply disappeared. Fortunately, these incidents were uncommon.

The Nordic community wasted no part of the Puffins. Feathers were used to stuff pillows and bedding, meat was eaten fresh or salted and cured for later consumption, and the rest of the birds were fed to the dogs. The villagers never went into winter without three or four barrels that each contained about 400 preserved Puffins. Puffin down was especially valuable to the islanders. It was as soft and light as eiderduck down and provided a welcome addition to the meager income they brought in from fishing and farming. 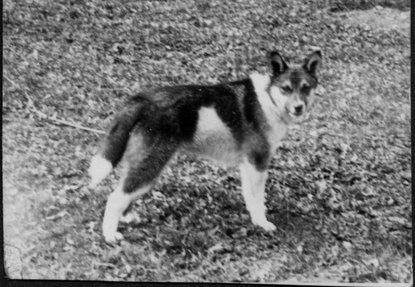 This Puffin-hunting cycle was repeated annually in Norway from the 1500s through the 1800s. In the mid-19th century, men began using nets to capture the young birds. As the popularity of hunting Puffins declined, so did the popularity of the Lundehund, and the breed suffered a severe decline in numbers. Fortunately, on the most remote Nordic islands – particularly Vaeroy, in the Lofoten island archipelago – some Lundies survived. The Vaeroy Lundehunds remained genetically pure, because they were never cross-bred with other dogs. They were concentrated in the tiny village of Mastad, which was extremely isolated. Mastad was a difficult place to live, for all of its residents. While fish were plentiful, the town had a dangerous harbor with whirlpool currents. The turbulent waters along Mastad's coastline contained countless submerged reefs that caused many fatal shipwrecks. The villagers grew hay on the occasional mountain field, but it was difficult and often dangerous to grow and harvest enough hay to support themselves and their animals. They relied on the Puffin harvest to make ends meet.

Sigurd Skaun, an avid dog enthusiast, is credited with re-discovering the Norwegian Lundehund in the early part of the 20th century. Various articles written during the 1500s mention Nordic dogs that were used to hunt Puffins on the islands of Vaeroy and Lovunden. When he came across those articles, Skaun wondered whether any of the Puffin Dogs were still alive. He began to investigate and eventually heard from some of his countrymen that no Puffin-hunting dogs remained on Lovunden. However, Skaun learned from the ferry-postmaster of Vaeroy that Lundehunds still lived on that island and still hunted Puffins. In 1925, Skaun published an article (in a Norwegian hunting and fishing journal) entitled: "A Norwegian Breed Of Bird-Dog Which Is On The Road To Oblivion." He begged the all-breed Norwegian Kennel Club to recognize the Lundehund, but it declined to do so, presumably because many dog fanciers incorrectly thought that the Lundehund was the same breed as the Buhund. The Norwegian Kennel Club ultimately recognized the Lundehund, but it took years for its members to realize that the breed was a true canine rarity.

In the 1930s, a dog fancier named Eleanor Christie, who lived in southern Norway, read Skaun's article and became intrigued by the Lundehund. She tried to acquire several Lundies from the island of Rost after meeting a politician living there who shared her interest in the breed. Unfortunately, this didn’t happen. Once men began trapping Puffins with nets, their hunting dogs became superfluous, were neglected and began to kill domestic sheep for food. The Rost community imposed a hefty tax on dog ownership and, within a few years, their Lundehunds were gone.

Eventually, Ms. Christie met Monrad Mikalsen, a farmer and fisherman who lived in Mastad and still hunted with his Lundehunds. There were only about fifty Lundehunds on Vaeroy at that time. Because no other dogs lived on the island, its Lundehunds were purebred and descended directly from ancient stock. Tight breeding within this isolated population stamped in the breed’s unique characteristics. In 1939, Mikalsen gave Christie four purebred Lundehund puppies: three females (Hild, Lyey and Urd) and one male, Ask. Each puppy was vaccinated against distemper. These puppies were the foundation of Ms. Christie’s program to save the breed from extinction.

In 1943, the Norwegian Kennel Club finally recognized the Lundehund as an independent breed. Unfortunately, a terrible distemper epidemic swept Vaeroy that same year. Because of World War II, it was impossible to obtain the distemper vaccine, and all but one of the island’s dogs died. Mikalsen reached out to Ms. Christie (who did not live on Vaeroy) for help. Under extremely difficult circumstances, she sent two pregnant Lundehund bitches and two puppies to her friend, to help repopulate Vaeroy with its native dogs. Although Otter, one of those two puppies, had never hunted before, he retrieved 14 fledgling Puffins on his first day out. The very next day, he brought 80 birds to Mikalsen, a testament to the quality of the surviving Lundehund line. 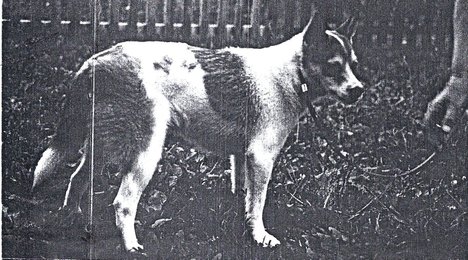 Ms. Christie’s generosity was fortuitous, because distemper swept her own kennels in 1944, killing all but one of her breeding stock. Only Ask survived. When he died in 1947 at nine years of age, his body was sent to the Zoological Museum in Bergen. In 1950, Monrad Mikalsen sent Ms. Christie two new Lundehund puppies to re-start her breeding program. Unfortunately, those dogs never reproduced. Because of her husband’s increasingly serious health problems, Ms. Christie could no longer run her kennel. However, Mikalsen had not forgotten that it was Christie who had helped him repopulate Vaeroy with Lundehunds after the 1943 distemper outbreak. In early 1960, after Christie’s husband had passed away, Mikalsen sent her three puppies. One pair out of those three had a successful litter in August of the following year. Interest in Lundehunds began to rise.

The Norwegian Lundehund Club was founded in 1962. The club had an excellent foundation on which to build. Most of the dogs were concentrated in one of two places: either with Mikalsen or with Christie. This enabled club members to start from scratch, with full knowledge of each dog's pedigree. In 1963, Mikalsen lost the last of his own dogs, and not a single purebred Lundehund was left on Vaeroy. Once again, Ms. Christie came to the rescue and sent her friend two purebred puppies by air. They arrived on Mikalsen's 75th birthday, much to his delight.

By the 1970s, Lundehunds had been exported in small numbers to Sweden, Germany, Finland, Denmark, England and other European countries.

By the end of the 20th century, there were about 350 Lundehunds in Norway and somewhere between 700 and 800 worldwide. Authorities now say with some confidence that the Lundehund has been saved from extinction. Today’s Lundies no longer collect fledgling Puffins, as that practice has been banned. Instead, they are beloved family companions and increasingly formidable competitors in the conformation and performance rings.